Most Chicagoans attend summer farmers markets in their quaint downtown neighborhoods, but this year Chicago’s suburbs are hosting their own weekend markets to accommodate growing trends and taste of self-described “foodies.”

From Lisle to Geneva to Vernon Hills, families and those new to cooking can get a taste of Momma Cuisine’s recipes all summer long. From June through August, Johanna Cook (creator of the Momma Cuisine, Inc. brand) will be hosting live cooking demonstrations at six farmers markets across western and southern suburbs in Illinois.

The public will have a chance to meet Momma Cuisine in person, discuss everyday cooking tips with her accompanying guests, and enter to a contest to win a free, one-week loan of a 2013 Buick vehicle. The tour is also sponsored by NessAlla Kombucha and Kenmore.

Midwestern foodies can register for any of these free presentations through the Momma Cuisine EventBrite page: http://mcbuicktour-eorg.eventbrite.com.

In 2012, the Momma Cuisine Summer French Market Cooking Tour (also presented by Buick) generated 12 million impressions on Twitter alone over the course of six Tour locations – about 2 million impressions per location. It also attracted between 500 and 1,500 food aficionados and new consumers for sponsors, and was publicized with the help of WGN Midday News, WCUI’s You and Me This Morning, Chicagonista, The Local Tourist, Foodie Chats and social media sponsors.

Below is the schedule of Momma Cuisine’s 2013 Summer Cooking Tour locations and guest appearances. Cooking demos start at 10am CST at all locations except for Western Springs.*

Johanna Cook is the Founder of Momma Cuisine, Inc., a multi-faceted cooking brand that hosts a cooking series on MommaCuisine.com, endorses Fortune 500 food brands, and appears regularly at local food industry and charity events. As a mother of three with a busy schedule, Ms. Cook relates to the struggles of individuals, couples and families who want to create Great Everyday Meals with simple ingredients and basic cooking techniques.

*Contact Megan@mommacuisine.com to arrange an interview with Johanna Cook for a blog review, feature article or news segment. 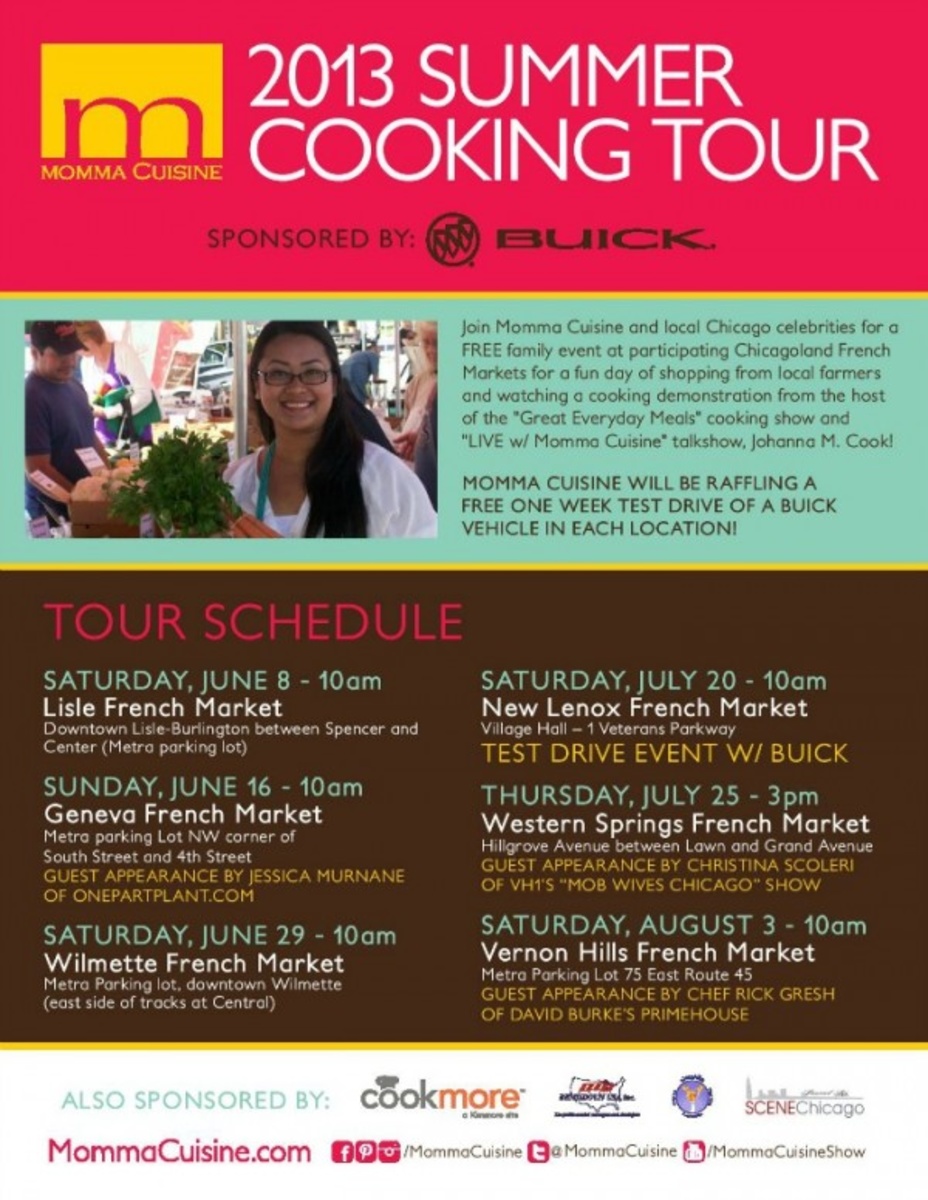