Hotel New Year’s Eve events aren’t new, but what is new is Hyatt Regency Chicago’s 90 million dollar renovation that boasts everything from a “complete remodel and transformation of the hotel’s 2,019 guest rooms and suites, as well as 65 guest room floor corridors”.

Even better is Hyatt Regency Chicago’s partnership with United Way. In the BIG Bar, they have created a signature cocktail named, The RedEye Ballroom Spritz. Now through New Year’s Eve, a portion of the sales from each drink will benefit United Way, which envisions “a world where all individuals and families achieve their human potential through education, income stability and healthy lives.” Soon, they also will be adding an option to purchase tickets to #NYEBlitz with an set amount to be donated to United Way.

Hyatt Regency Chicago is also holding a sweepstakes where the Grand Prize Winner receives a one-night’s stay on New Year’s Eve, a professional makeover for NYE,  two complimentary tickets to the #NYEBlitz, breakfast at the The Bistro at 151, and a gift certificate to a department store! The second runner up will get two complimentary tickets to the #NYEBlitz.

*Disclosure: I am an invited guest to the Hyatt Regency Chicago #NYEBlitz. 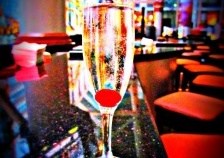