Do Electric Grills Cause Cancer?

When shopping for food preparation appliances, one of the common things people ask is: Is this a healthy way to prepare food? It is an incredibly commonplace question by potential electric grill buyers, most of whom hope to integrate such an approach in their daily routines in hopes of becoming healthier.

Today, we’ll go over the different health benefits of electric grills and the ways to maximize them. We’ll also tackle the common misconception that these grills put you at a higher risk for cancer than its alternatives. For all things electric-grill-related, feel free to visit YardTrend.com.

The Truth About Grilling

In the quest to eat healthier, people have realized that healthy preparation wins out over fad diets any day. Not only can it help you sustain a healthy weight, but it also allows you to adopt a healthy lifestyle long-term.

In general, grilling is one of the healthier ways to prepare food. Unlike frying, it requires less grease and doesn’t involve soaking food items in oil. These alone considerably sink one’s chances of getting a stroke at some point.

Electric grills also hold the edge over charcoal and gas grills in terms of safety. They aren’t as prone to developing carcinogens and other cancer-causing compounds in food, making them an excellent method for preparing food daily. The fact that cancer-linked compounds often develop from outdoor grilling means you’re pretty much safe with an electric grill used indoors.

Now that we know the health benefit of reduced cancer risk when using electric grills, it makes us think what other health advantages these appliances have to offer.

Electric Grill Health Benefits and Ways to Maximize Them

Meat and seafood aren’t the only food items you can cook on the grill. Vegetables make fantastic grilled creations, as well.

Most electric grills include a tray to allow you to grill leafy greens along with other food items, which is a great way to mix the flavors up. If compounds linked to cancer ever develop in food, they’d most likely develop in meat, so fruits and veggies on the grill should pose little to no health risk.

Now, we definitely aren’t saying you forego grilled meat entirely; we’re simply suggesting you balance things out according to what’s healthy. That would mean striking a balance between fiber-rich leafy greens and protein-packed meat.

Onions and tomatoes are staples in most meat recipes, but there are plenty of others to include, too. Some excellent considerations would be pepper, cucumber, eggplant, corn, carrots, and many of your other favorite vegetables. You might also want to increase the fruit portions and include apples, mangoes, pears, and pineapples in your grilled recipes.

Electric grilling significantly reduces the risks of cancer-linked compounds developing in meat more than any other grill alternative. When coupled with preventative measures, like getting rid of excess fat on meat before grilling, the result can be even healthier.

Hence, you’ll be grilling a leaner cut of meat. Using a healthy marinade can decrease the risk of cancer-causing compounds developing in the meat. Flipping food now and then and grilling for a lower time also helps result in a healthier outcome.

How Do Electric Grills Compare to Charcoal and Gas Grills?

Despite no longer being at an intimidating price range, electric grills are still often avoided by grill buyers. Generally, people are just reluctant to test them out. That isn’t just because of their perceived high price either, but also because of the claims that they result in different-tasting food.

Well, the “healthier” taste can take some getting used to, and this is no different from the twist of flavor electric grills tend to have on food. Charcoal and gas grills might result in the flavors most people love, but they won’t exactly deliver the healthiest grilled food options. They also come with specific safety concerns that make them unsuitable for indoor grilling.

Another plus for charcoal and gas grills is they let you grill a variety of food. That’s because they usually come with items for holding different kinds of food, including drip trays for keeping oils, fats, and other liquids.

Of course, the edge in terms of portability goes to the electric grill, as it’s usually easier to transport than its conventional counterparts. Plus, while a little “different” at first, the healthy twist it has on food flavors doesn't take as long to get used to like other food preparation methods.

We’ve established that grilling is among the healthier food preparation methods out there. Still, you can take its health factor to an even higher level by opting for the electric grill. It has fewer safety concerns than its traditional alternatives, is less prone to capturing cancer-causing compounds in your food, and is excellent for grilling leafy greens. Now, if that isn’t what you need to adopt a healthy lifestyle, then we don’t know what is.

Photo by Streetwindy from Pexels 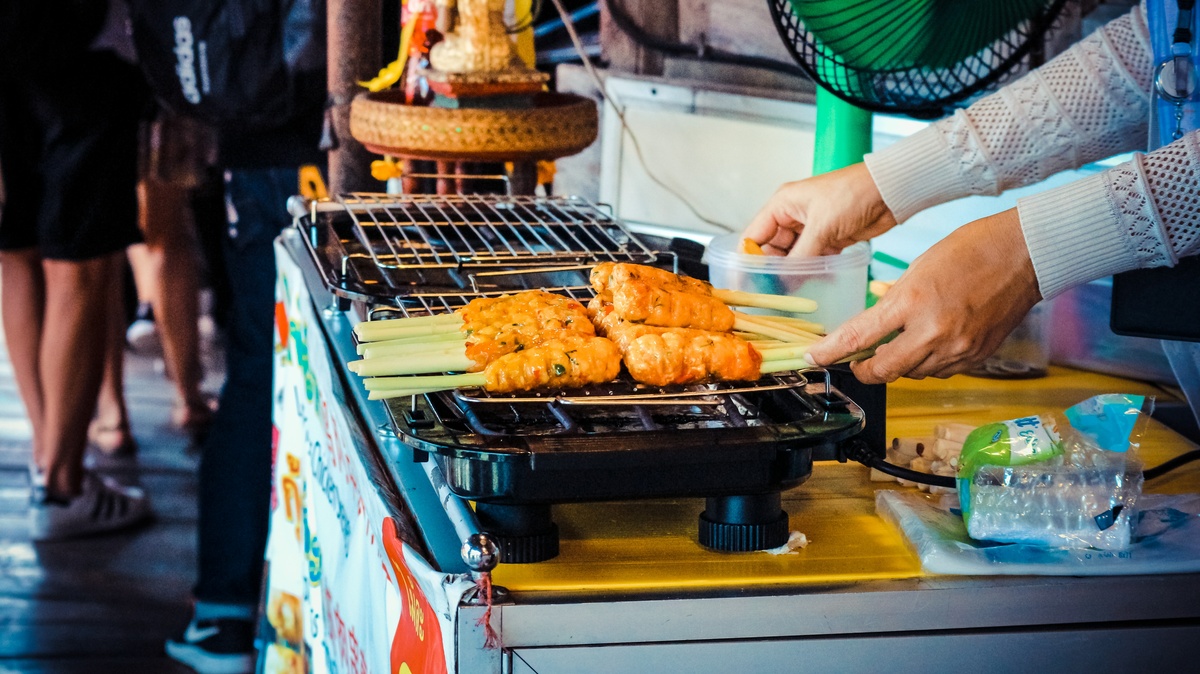